They say bad things often come at night… and on a starless night nearly three ten-days ago, night lived up to it’s dreaded reputation…

It was not an attack, nor some fell magical assault, it was simply a man, a courier, who bore the briefest yet most dreaded message…

“I HAVE FOUND HIM”

He has started again, worse than before. 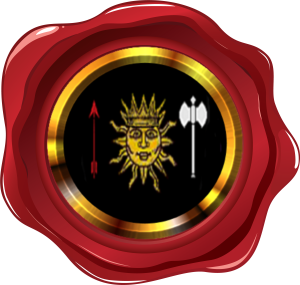 There it was the seal… that damn seal. There could be no mistaking it, nor ignoring it.

WE made a vow.

In CY 443, IVID the 1st, fresh off his annihilation of the line of Raux, had just ascended the Malachite throne and as was their sworn duty, the men and women of the Knight Protectors opposed him. You see, the Knight Protectors were unlike any other knightly order, though they had duties to the crown, their primary mandate was the protection of the people of the Great Kingdom.

IVID I knew that his reign would be opposed by the Knights so he allied with the hated and wholly evil Deathknight Saint Karagoth, the betrayer and his dreaded thirteen fellow deathknight traitors to the Kingdom and Crown. He then issued a royal proclamation disbanding the Knight Protectors on charges of Treason and any Knight found within the realm would be put to the sword.

A full score of years plus nearly half again have passed since I had my most terrible lesson from night. That’s when they came for our families, ten knights and their families were captured, to be tortured and put to death, not quickly and not all at once to be sure. Even though the orders where from IVID, he never did the deeds or even watched; that was left to the dread deathknight Prince Myrhal of Rax who set the tone by starving all of us for nearly a fortnight, then flaying every inch off of SER Talibor and feeding that flesh to Talibor’s own wife and children… I could see the hunger on all of the faces, I could also see that almost all wanted to eat that flesh, including myself… It took twelve days for SER Talibor to come to the point of death… Before Myrhal struck the killing blow, he had his lieutenant, the vile Vampire Seridwen the Despoiler give the dark kiss to SER Talibor’s two children, he lived long enough to see his children turned and hear the order Seridwen gave for the new thralls to fed upon their own mother…

Prince Myrhal of Rax, then left us to the “tender mercies” of his lieutenant and we were all tortured frequently. Things went like that for awhile… tortures were inflicted upon us children and our parents until all of our parents save one were killed. They were tortured and killed in ways that earnestly, could make the most dreaded tales of terror and sagas of woe pale in comparison… The one who was saved for last was the Lady Alysanne Stokeworth, Paladin of Heironeous, Knight Protector and Hero of the realm. Lady Alysanne was the epitome of a knight, honorable, courageous and fearless, well not fearless…

That vampire bastard used all of us to leverage concessions from Lady Alysanne, all the while, we were witness to several gruesome violations of her mind and body…. Seridwen took enormous delight from our reactions but there was one of us who gave him no such satisfaction; the one he most wanted to break and she was Aeryn Stokeworth, Lady Alysanne’s trueborn daughter. At the age of ten and four, Aeryn was the oldest of us and she was every measure of her mother. In the end, Seridwen presented Lady Alysanne with a “choice” renounce her god Heironeous, willingly accept the dark kiss and become his bride and he would free Aeryn. Deny or resist and he would give Aeryn the dark kiss; then have thrall Aeryn feed upon her as SER Talibor’s children fed upon his wife. He then added that feeding on her would be the second command he’d give Aeryn the thrall, the first command would be to get to know her in a biblical way… At this Lady Alysanne broke, wept in despair and beseeched Heironeous to help her. No sooner had she mentioned the great god Heironeous, Seridwen was on her, ripping out her throat with his fangs, he prolonged it enough to promise Lady Alysanne, that her daughter would be turned that very night and that even thrall’s would weep at the trials he would have her endure. The Lady Alysanne could not manage any words but she spat in his face and died.

Seridwen, then ripped The Lady Alysanne’s head off and threw it at Aeryn. He then said “Do you have any last words child, say them now”.

Aeryn said “I have no words for you creature of darkness, you are but a weak and frightened thing, who inflicts the evils you do so that you can feel big for but a moment, I pity you. Instead, I will say my words to the shining one, Holy Heironeous. I would ask of him to grant me the courage to die well; I would beg of him to allow me to die in glorious battle as was denied my mother; I would promise, to serve him faithfully for all of my days, from this day, till my last day should he grant me the singular boon of ramming my fist into your vile face. Lastly, I would tell my lord Heironeous, that should none of those things come to pass, that I thank him for my life and for allowing me to be my mother’s daughter”. She then spit right in Seridwen’s face.

As the spittle ran down his face, he shrieked in agony as a line of silver fire ripped open his cheek, at that very moment, a ray of pure sunlight blazed through the night’s sky and fell upon Aeryn, who with the vigor of fifty men, bursted her manacles and rushed Seridwen. Seridwen’s eye’s went wide when Aeryn ripped his own sword, Life-Blight from it’s sheath and in a reverse grip opened up his bowels, Seridwen staggered back and Aeryn pressed him hard, scoring a slash across his thigh and another blow that nearly cut his left arm off. Seridwen howled in pain and rage, swearing that he would rip Aeryn in two and grabbed her sword hand and broke it at the wrist, the bone jutting out spraying her blood as a fountain; Aeryn dropped to her knees in agony. “You have lost, harlot of Heironeous and now you die.” He slowly opened his mouth, his jaws opening wider than any human’s is capable of, his fangs gleaming. As his head descended for the kill, Aeryn, in utter outrage screamed "No!!! Now you DIE, Monster!!! and punched forth using the jagged bone of her broken wrist as a spear, jabbing it straight into Seridwen’s mouth.

The vampire’s corporeal form started to melt into a gaseous substance but before he lost his form, Seridwen mocked the fact that Aeryn “may have defeated him but she’d never kill him and to live in fear until the night of my return”; the cloud disappeared into the night. Aeryn retrieved Life-Blight and made short work of the few thralls that came to answer their masters wail.

She freed us and we all sworn an oath to find the bastard and kill him permanently. Out of thirty-eight children, only ten of us including Aeryn survived our ordeal. Aeryn, has dedicated her life to Heironeous, becoming a paladin like her mother before her. She took a holy quest to eradicate vampires and has constantly been on the search for Seridwen. Many of us upon becoming adults, adventured with Her, Many of us helped her search for over a decade, Most of us have moved on as best we can. All of us cannot sleep in the dark…

After decades of Aeryn searching, hunting down rumors, investigating whispers, many of us held to the hope that Seridwen died later that night and we could live out our days without this confrontation… Now the time I have dreaded for nearly thirty years has come, He has been found and I must go and do my part to stop him. I’m terrified and I know I’m not the only one… I wonder will victory grant us peace? I hope so… What if we fail? What horrors will be visited upon us should we fail? Please great gods above Don’t let us fail.

An open letter to my friends, apprentices and students,

I'm sorry, but we no longer support this web browser. Please upgrade your browser or install Chrome or Firefox to enjoy the full functionality of this site.